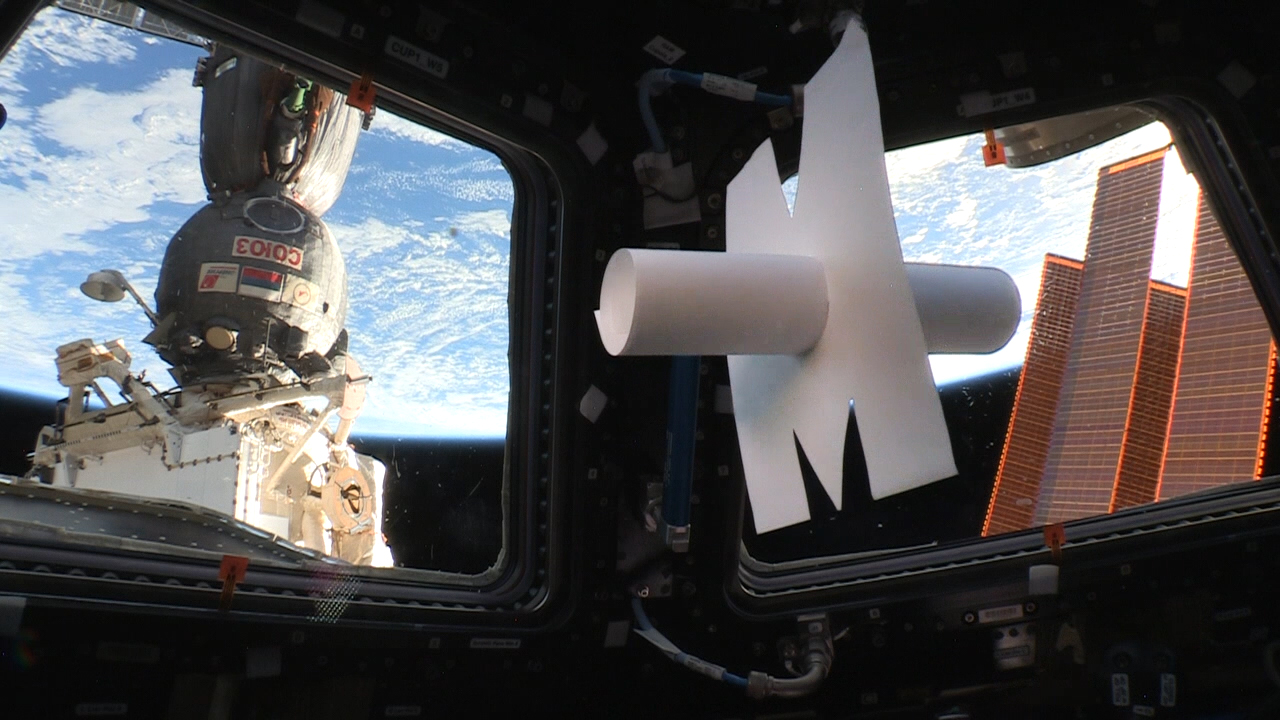 Exhibition opening Wednesday 24th November at 6pm
with Eduardo Kac, who will be signing his book Téléscope intérieur, edited by Gérard Azolay, director of the CNES Space Observatory.

Artist Eduardo Kac spent years preparing the protocol for producing his outer-space work Inner Telescope, which was executed by astronaut Thomas Pesquet. He methodically planned the cuts and folds that would finally be executed on 18 February 2017 in zero gravity, at an altitude of about 350 km. Thus one the most technical objects that humanity has ever created, the International Space Station, provided the venue for the paper telescope choreography.

It even made us forget the extreme speed at which the ISS was travelling—an astounding 28,000 kmh. The artwork and the setting seem to be diametrically opposed. The utter fragility of the work compared to the solid windows of the cupola, through which we can make out Earth, which itself appears so fragile.

The “M” in this weightless sculptural poetry conveying the idea of an optical instrument is a collective “me”, because it is pointed toward us. The preliminary sketches, fleeting performance and resulting creations all speak to our desire to travel outward and our duty to look inward.

A proposition by Valérie Hasson-Benillouche of Galerie Charlot.

Frédéric Deslias – #Exoterritoires – What if the Earth was an inhabitable exoplanet?
Friday 26 November at

Alongside the exhibition, Frédéric Deslias will be presenting #Exoterritoires, an urban exploration performance created at CNES, the French space agency. The crews will simulate forays into unknown territory in a parallel-reality search for traces of life, symbiosis or parasitism.

Image: Eduardo Kac, Inner Telescope (in the cupola), International Space Station, 2017. Produced by the Space Observatory at the National Centre for Space Studies, in collaboration with the European Space Agency.